Description: In this 12 week film making intensive, participants will be guided through the fundamentals of film production. Topics will include:

Kyron continues to engage in outreach productions for youth such as the short film “Skyglow.” 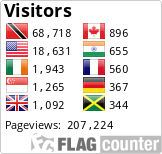